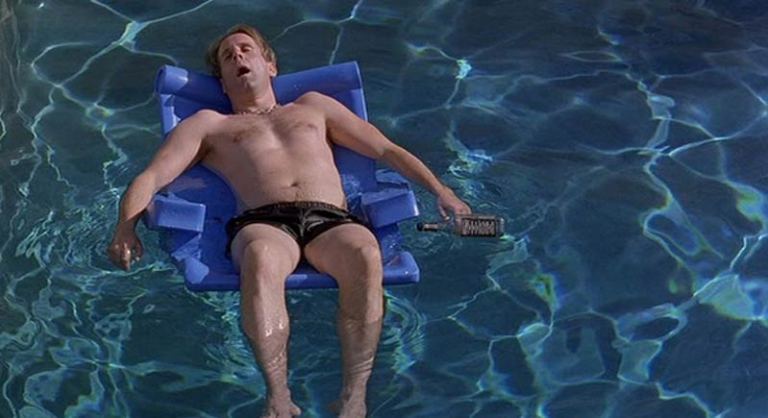 Nihilism just doesn’t have a good rep these days thanks in part to films like ‘The Big Lebowski’ in which the nihilists were portrayed as hedonistic, tribalist, simpletons who professed themselves to be ‘believers in nothing’.

The Big Lebowski nihilists were presented as black clad, German accented neo-Goths with low IQ’s and high levels of stupidity whose gang leader liked nothing better than floating about on a lounger in a pool close by to a beautiful woman who was willing to have sex with him.  They came across as hedonistic, miserable people who wanted instant gratification, being willing to do any ludicrous thing to get it in a darkly comic way.

I appreciate that ‘The Big Lebowski’ was a comedy and that the characters portrayed in the film were all very one dimensional, whether it was the reluctant hero and accidental private investigator come bowling king pin known only as ‘The Dude’ played by Jeff Bridges or his aggressive, Vietnam veteran best friend ‘Walter Sobchak’ played by John Goodman, who with every sentence expressed his characters deep inner pain.  Nihilism however is a worthy mental discipline and philosophy that I’m rather fond of as a thinker, simply because Nihilism represents an intellectual path to true freedom.  The mistaken charge that Nihilists believe in nothing is as far from the truth as any statement can be.  Nihilists do believe in something and that something is called reality.  Nihilists take reality at face value.  It is, what it is, nothing more.  They don’t expect anything special from it and they certainly don’t expect it to make sense or gift them with meaning.

You see, if you think upon the nature of material reality for long enough you will come to a rather disturbing conclusion and that is that there is no meaning to life.  If you look for it, it can’t be found.  The premise is simple, if there was a meaning to life it would be compulsory and we’d all know about it.  It would be stunningly obvious.  The simple fact that meaning cannot be found tells you that there is none to be found.

There is no meaning to life…

If you follow this further down the rabbit hole you will soon see that the greater universe is also devoid of meaning and that your individual existence has no bearing on the cosmos, you are not special or chosen, and what you do or how you do it is utterly unimportant when compared to the vast and never-ending expanse that we call the universe.

What you are, and who you will be will ultimately disappear without a trace when measured against eternity.  At best you are just a flash of light between two gulfs of never-ending blackness, so you might as well party because this life is all that you’ve got.  This is the point at which our ancient forebears created religion because they needed meaning even though there wasn’t any to be found.  They needed to explain creation and the wonders of the universe from the constellations in the night sky to the mightiest mountains and far-off foreign lands as well as the rising sun and the positions of the moon.  Searching for meaning in a meaningless universe is a natural human response to that which cannot be explained because there is nothing to explain.  Think about it and try to come up with any explanation that you can to serve as a meaning to life and I’ll shoot it down in an instant.

Is it to have children?  Well, that’s not as easy as it sounds, and it’s not compulsory you can choose not to have kids?

Is it to believe in God and follow a religion?  Well, before you do that, you need to prove convincingly that this God exists.  Nihilists understand that the proof is missing, which leads most Nihilists to become atheists.  I say most, because some like myself are also dualists who see the divide in reality as being one of mind versus matter.  I won’t get into this today as it’s too distracting and it doesn’t really change anything.  We’re all going to die and none of us will be coming back, but between now and then we all need to find something to do, which brings us onto personal meaning.

Existentialists understand that the only way to have meaning in your life is to create one yourself.  If you want to believe that the meaning of your life is to have kids and keep on propagating those genes then go for it, but don’t apply that rule to everyone.  In contrast Nihilists negate even this, meaning cannot be found in the cosmos either at the level or the individual or at the macro level of the entire universe.

What you see as meaningful, may well be abhorrent to someone else.

If you want to be the best at your line of work or find fulfilment in your hobby then by all means, enjoy yourself, strive to be the best.  You might want to be a politician and change society for the better and whilst this might be a good thing at the human level, as far as the rest of the universe is concerned it’s unimportant.  It’s just a short-lived flash of light amongst the blackness of eternity.  The only truth to existence is the eternal darkness measured against your particular flash of light which is one of many deterministically firing against the void.  These flashes might form part of a larger pattern and studying this pattern may well be interesting but it still won’t reveal any meaning.  At a fundamental level we’re all just a pattern in the cosmos, a cloud of atoms that is ever changing.  A skin encapsulated ego, as ephemeral as a may fly.  This might sound depressing, but I’m going to turn this on its head, because nihilism does something incredible that other philosophies fail to do or only partially address.  Nihilism sets you free.  It says to you, that you might as well do what you want, because there is no man in the sky to judge you, like stoicism it tells you that virtue is its own reward and that the consequences of your actions are your own doing.  A good or a bad life is up to you and judged to be good or bad by you.  Meaning is an illusion of biology that you are obliged to act out in life whatever you define it to be, so choose your meaning carefully and don’t be afraid to change it if it doesn’t work out for you.  There is no pressure to behave in a certain way, you are not required to do anything other than be the person that you want to be.

The one thing that was compulsory, that had to happen was your birth.  It was the one event in your life that you had no control over, after that everything is optional.  You are not even required to take your next breath.  You can kill yourself if you want to, though I don’t see the point as one day you’ll die anyway so you might as well wait.

Nihilism tells you that your birth is unimportant, that your life is unimportant, so take the pressure of and make the best of it, you are now free to be happy.  There is no need to serve God, or humanity or work for medical science or the betterment of mankind, you can be ordinary and happy.  External pressures to do well simply represent other people’s aspirations and goals for you that might be well intentioned but are not any more intrinsically meaningful than anything you can come up for yourself, such as being an astronaut, opening a cat sanctuary or working in a dead-end job and partying on the weekend.

The search for meaning is one of mankind’s greatest follies and can never lead to happiness.  Meaning is simply a way of aggrandising the ego and the ego can never truly be satisfied.  Nihilism tells you that happiness does not come from without, it points to happiness coming from within, because anything beyond your skin is devoid of meaning anyway, so you won’t find happiness out there.  At best, the fulfilment of any worthy goal will bring you a temporary high that won’t last so if achieving goals makes you happy, you’d be well advised to get another goal, a bigger and better goal and go at it thus chasing the pain away.  Nihilism recognises that life is painful.  It’s painful because we spend much of our time looking for things that do not exist, such as meaning, so if you accept that there is none, you can immediately cancel out this pain and start living gainfully.

Relax we’re all going to die…

I see meaning as being a bit like a man cast adrift in an open boat, he’s in a vast ocean, there’s no land in sight, he can point the boat in any direction he likes and row or sail along with it.  He might convince himself that there’s an island out there somewhere and that he’ll eventually find it if he rows hard enough and for long enough.

He might enjoy the rowing or he might not.  He might meet other boats that are crewed by other people, they might row along together for a while all headed for the same island, shared purpose can be fun.  Together they might meet another flotilla heading in a different direction, they might get along for a time, respecting of each other’s differing views or they might even go to war and try to sink each other’s boats even though none of them have seen an island and can’t agree on whether there are many islands out there or just one or even what the conditions on land are like when they finally get there.  The nihilist understands that the rowing is unimportant because islands cannot be proven to exist there is only the ocean.  He might as well turn the boat into a lounger and float along in it, basking in the sun.  The experience of time passing is the only game in town.  This brings us back to the Big Lebowski, which like it or not is a nihilist movie, the main characters are just drifting through life, apathetic and full of unrealised pain and its associated problems whilst the purposeful characters are keenly chasing goals of their own making.  The film’s main character ‘The Dude’ is accidentally successful and seems to solve the mystery of the film without any clear plan whilst the film itself lacks a clear plot being made up of the meandering actions of the other characters whilst resolving into a storyline that itself is utterly meaningless and without morality.  Just like life.

The fool replies, ‘why should there be a why?’

The wiseman looks with contempt upon the fool.

The fool knows that the wise man, is not wise…”